We partner with a well-respected Kalkan-based tour agency who arrange popular pre-bookable excursions to local places of interest. These include: 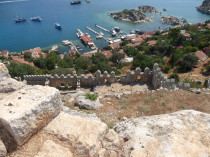 Now in its 10th year of operation, recommended by three UK newspapers and featured in the tour guide 'Let's Go Turkey', our partner's success was founded on this lovely tour.

The boat used has all the amenities for your comfort and enjoyment and the tour groups are kept deliberately small to ensure a relaxed and carefree day. Now classified as a National Park, this excursion is made complete by our partner's method of operation. The boat is licensed to carry 42 passengers, but the maximum carried is 25, therefore ensuring plenty of space for everybody on board.

There are four stops at beautiful bays for swimming and snorkelling and a visit to the fairytale village of Simena and its Ottoman castle (only accessible by boat) is also included. This is a truly relaxed and carefree day. Lunch is included along with afternoon tea and biscuits.

Tuesdays and Fridays - £20 per person. 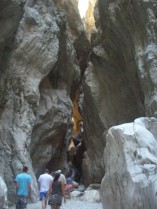 Saklikent Gorge is home to the rushing torrent of the Xanthos river, which has carved itself into the rock to create a stunning natural wonder. With the aid of a guide and a ropeway, it is quite safe to enter the gorge if you don't mind getting wet - a great way to cool off on a scorching hot day! Sensible shoes are a must.

Lunch is taken, Turkish style, at nearby Yakapark beneath shady trees. After lunch, a visit to Tlos allows you to explore the remains of the ancient Lycian / Roman site. These include an ampitheatre, Roman baths and an ottoman castle. A great family day out.

Wednesdays and Saturdays - £20 per person. 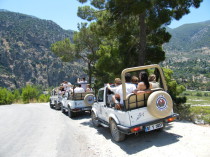 A fun day out for explorers of all ages. Professional guides and drivers lead the jeep expeditions in convoy allowing you to take in all the fabulous scenery and archaeological sites in one day.

The first stop is at Xanthos, the ancient Lycian capital city. Afterwards, the convoy stops off at Saklikent Gorge (see above), where a waterside lunch is taken and as an extra, you can enjoy a spot of rafting. After lunch, you're invited to take a mud bath next to the Xanthos river, before heading off to the sand dunes at Patara Beach. 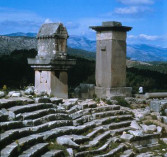 Xanthos (dating back to the 4th century BC) was the capital city of ancient Lycia and it remains  in a remarkable state of preservation. Discovered by Charles  Fellows in 1838, this  is a lovely site to visit.

At Letoon, you can see the remains of the temples dedicated to Leto, Artemis and Apollo. At certain times of the year this site is invaded by many terrapins and frogs as it’s partly submerged under water.

The trip includes a superb lunch at  Islamlar (a traditional village in the mountains) with  far reaching views over Kalkan and the sea. Finally, there’s a visit to the beautiful mountain village of Bezigan before returning to Kalkan.﻿

Enjoy a relaxing ride, at a steady pace,along the Lycian Way. Along the way you will have chance to enjoy the fantastic views of the whole beach of Patara and the ruins including the amphitheatre, senate building and the castle.

Further along you will pass through the beautiful pine trees and natural surroundings ending up overlooking Yala Bay with Kalkan in the distance.

Here you and the horses will enjoy a short break and you'll have another chance to take pictures and take in the scenery before returning to Patara. 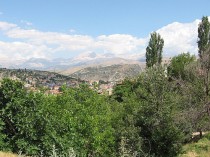 A lovely trip through the cool scenic mountains to the Ottoman town of Elmali, which boasts one the finest mosques on the Tekeeli Peninsula.

The trip includes a visit to the old quarter, famous for its wooden, well preserved two-storied houses (some dating back to circa 1600). The old traditions and crafts still survive here today, which you will have the opportunity to see.

Arycanda, set very high in the mountains with stunning views into the valleys below, ranks as one of the finest and least visited sites in Turkey. You will understand why the pleasure-loving  Lycians made their home here in this magnificent city. You’ll return to Kalkan via the scenic mountains.﻿ 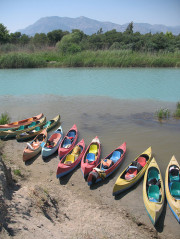 A trip to Turkey is not complete without a canoe trip down the beautiful river Eşençayı  (Xanthos River).

Starting at Kınık, the river flows 15 km down to the famous Patara Beach. The natural surroundings and views are fabulous.

During the trip there is a break for swimming, or taking a mud bath.  A great day out for all the family in complete safety.

Mondays, Wednesdays and Fridays - £20 per person. 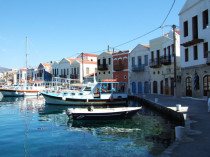 Meis island (or Kastellorizo), is a very pleasant day trip from Kas or Kalkan. This tiny Dodecanese island with its population of a couple of hundred, sits opposite the harbour of Kas and in the day time you could be forgiven for thinking it is uninhabited as the port town on the landward side can be a little hard to spot. At night however the lights of the houses, shops and restaurants along the promenade twinkle enticingly across the moonlit bay.

Kastellorizo has an interesting history of its own, governed by Rhodes, Egypt, the Venetian Doge and the Ottoman Turks. It's 20th century history gets much more complicated with the little island passing through the hands of the French, Italians and the British.

The events leading up to and including the 2nd World War pretty much decimated the island and its population and the fact that there's anybody here at all is a testament to the islanders determination to keep their community alive.

Most people get here by boat - there are ferries from Rhodes and recently, direct from Athens. Lots of private yachts pull in of an evening to tie up in the harbour for the night. You may not believe it but the island is served by Olympic airways from the Greek mainland with its own landing strip built on the island's central plateau. The airline shuttle bus is pretty much the only motorised transport on the island. Most people walk everywhere.

The island has a hotel and a couple of Pansiyons but if you've come from Turkey, staying overnight may not be an option, depending on the prevailing regulations, which are subject to frequent change.

For such a small island, there's quite a lot to see here. The harbour area is charming with a warren of alleys and houses behind the pretty waterfront shops and restaurants. The churches, dedicated to a variety of St. Georges, provide landmarks to find your way around but you don't need to know very much to enjoy the atmosphere. For those who like to know what's what, Marina Pitsonis's booklet, 'Capture Kastellorizo' tells the story of the island and provides information on various buildings of interest and walking tours.﻿﻿

Prices shown above are correct as of July 2015.

PLEASE NOTE THAT YOUR EXCUSION BOOKING IS DIRECT WITH OUR PREFERRED KALKAN-BASED TRAVEL AGENCY AND WILL BE SUBJECT TO THEIR TERMS AND CONDITIONS (A COPY OF WHICH IS AVAILABLE ON REQUEST). PAYMENT FOR YOUR EXCURSION(S) WILL NEED TO BE MADE TO THE TRAVEL AGENCY DIRECTLY. FURTHER DETAILS WILL BE PROVIDED TO YOU PRIOR TO YOUR ARRIVAL IN TURKEY.

Our consultants are on hand to help and advise you, so please get in touch:

Villa Mirage - a superb 4 bedroom detached villa with pool and Jacuzzi section. Available for holiday rental from mid-June until mid-September.